Jainism: A Branch of Yoga

The three dominant India philosophies and practices previous to the appearance of the main religions of Jainism, Hinduism, and Buddhism consisted of Tantra, Yoga, and Veda. Tantra, an age-old Indian practice that already encompassed concepts such as pranayama, asanas, and meditation, was the base and source of Yoga. Veda, on the other hand, was a revered tradition brought to India by the Aryans that shortly mixed with both Tantra and Veda.

Unlike Buddhism, there is no single founder who can be directly linked to the beginnings of Jainism. Jains do, however, recognize several prophets whom they refer to as Tirthankaras. These individuals have appeared during different periods in history and have each played a role in showing the way towards Moksha or liberation. One of the major and most recent Tirthankaras was Mahavira, a prince born in northern India around 599 B.C. and who is often seen by many as “the father of Jainism”. 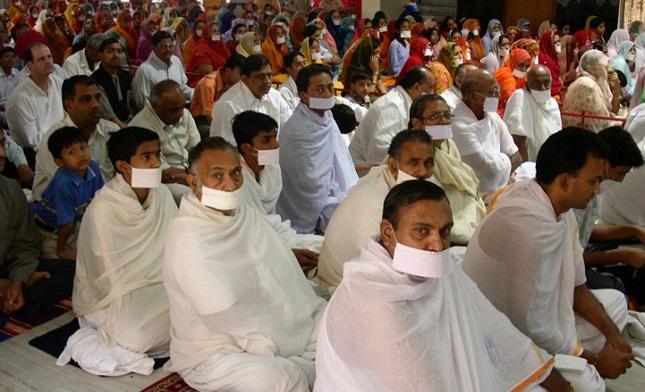 Similar to the Buddha’s story, Mahavira left his life as a royal and followed the steps of a sadhana, giving up all mundane pleasures and comforts. After spending approximately 12 years submitting himself to a diligent meditation practice as well as fasting, he reached kevalnyan or enlightenment. From then on, he dedicated himself to teaching other aspirants; adding the principle of chastity (Brahmacarya) to the other four principles previously laid out by the 23rd Tirthankara named Parshva, consisting of non-violence (Ahimsa), truthfulness (Satya), not stealing (Asteya) and non-acquisition or no possessions (Aparigraha).

Following the path of dharma, a word that within this context stands for “truth”, is one of the basic concepts taught by Mahavira while also pushing his disciples to develop the right belief, right knowledge and right conduct known as the three jewels from which the previously mentioned five principles derive. Right faith or samyak darshana stands for perceiving things under a correct awareness that pursues distinguishing truth from untruth. Right knowledge or samyak jnana stands for living without attachment or desire and knowing about the six substances and nine truths of the universe. Right conduct or samyak charitra stands for living by following the Jain ethical code. Having non-violence at its core and avoiding any kind of harm towards all sentient beings.

Jains live and aim at an existence driven by high morality in order to eliminate karma from their soul or jiva. Similar to Buddhists, Jains believe in reincarnation until achieving enlightenment and that one’s prevailing karma will determine the nature of one’s next life; having the possibility of reincarnating in a body that may not even belong to a human or an animal.

A common practice within the Jain religion is fasting. It is believed that fasting has the capability of purifying both the physical body and mind. There are four types of fasting: complete fasting, partial fasting, and the limited fastings of vruti sankshepa and rasa parityaga. When a Jain practitioner recognizes that his or her body is no longer useful as a vehicle of spirituality, he or she can decide to go through santhara or fasting to death.